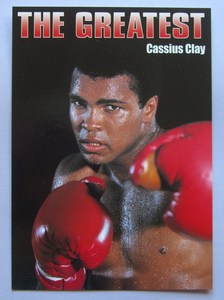 We were both working our way through school. I, a white kid from the West End of Louisville, he a black kid from a couple of miles east on Chestnut Street.

We would probably never have crossed paths if it hadn’t been for a woman at Nazareth College, now Spalding University, on 4th Street in downtown Louisville. Sister James Ellen, a Sister of Charity, hired both of us to work part-time stacking books in the school library. I rode the city bus, where “colored” had to sit in the back. Cassius walked across the street from Columbia Gym where he was practicing for Golden Gloves.

I wince when I hear Ali tell about going back to a Louisville restaurant after he won his Olympic medal and the waitress said, “We don’t serve colored people.” When I hear his reply, “I don’t eat colored people,” I smile. And I remember how he lost his medals and went to jail for refusing to fight in Vietnam, “I don’t want to kill my brothers.”

Ali is gone. But his light continues to shine.

Yesterday I was at my usual post at the Hispanic Clinic in New Haven, CT. Around the table were people from five countries, faces of many colors, ages late 20s through 70s. Each of them had a story about how Ali had shone for them. Luis from Venezuela said,

I was 16 when he beat Forman—an impossible feat! I remember walking back home that night thinking: “If Ali could do that, I can do things that seem impossible.” That memory has kept me going through many tough times, even up to today.”

Ali, rest in peace. You deserve it.

But keep stinging us like a bee. And float us in your many-colored butterfly love. Our world needs it.

OASIS in the Overwhelm

Oasis in the Overwhelm™
60 second strategies for balance
in a busy world
Oasis Strategies have helped people from all walks of life find balance and enjoyment. Try them for yourself.

Are You Taking Care of YOU?
Get a FREE Self-Care Checklist when you subscribe.