What’s a Dad Good For? 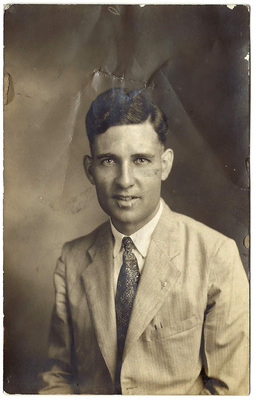 my dad – used with permission
That’s my Dad, Edgar Robert Grenough. Long gone, but his spirit lives on.What was special about Dad?
When I asked my six siblings “What’s the best thing you got from Dad?” their answers were as varied as my sibs:
“My good looks and curly hair…” (that from my ever-cocky older brother) “His ability to help us have fun and do all kinds of different things, even when there wasn’t much money…” (my older sister)

“His readiness to help anybody. If his Chevy had room, he’d stop at the corner bus stop and ask people to hop in… “ (a younger sister)

Before he met my mother, my Dad lived in many homes in many places — Montreal, St. Louis, Louisville. He fought and was wounded three times in the War in France. These experiences helped him realize that he wanted his family to have a life that was stable, but as multi-faceted and rich as possible. When Ed married Bernie, they looked for a brick house in Louisville, Kentucky, and that’s where they raised the seven of us. Dad knew how to make things stretch. When someone asked him, “How you doin’, Ed?” I remember his ready answer: “Never felt better and had less.”

Dad might be surprised to know that his children continue his “gypsy” spirit in various places: his oldest son now in the great beyond with Dad, two in Kentucky, two in Florida, one in Connecticut, and one in Myanmar. But then again, maybe he wouldn’t at all be surprised.

I was curious to know what key message others received from their Dads, so I asked.

Lisa: “I didn’t know him. He disappeared when I was a baby. That helped me realize how important family is. My mom was both mom and dad to us, so we honor her on Mother’s Day and Father’s Day.” Maria, whose early childhood was spent in a one-room house with a single light-bulb: “Hope, change, transformation–faces of the same coin. His hope for a better life for me and our family brought him to the United States.”

Bernie: My Dad’s mother died when he was 11. He always said that was the best thing that happened to him because it made him appreciate life. Me, too. It’s important to care for everybody; animals, too.

David: “Optimism. I remember him always saying, ‘In that pile of dung there’s a pony somewhere.”

What’s the most important thing you got from your Dad? If he is still alive, tell him!
If your Dad is not around, share stories about him. Ask others what they remember about him.

This is a great time to ask:
* What is the key legacy I received from my Dad?
* What do I want to leave as my legacy?
* How can I put my legacy into action – today?

My Dad hadn’t heard the phrase “Pay it forward.” But that’s what he did. His simple being reminds me of Marian Wright Edelman’s words: “Be a good ancestor, stand for something bigger than yourself, add value to the earth during your sojourn.”

OASIS in the Overwhelm

Oasis in the Overwhelm™
60 second strategies for balance
in a busy world
Oasis Strategies have helped people from all walks of life find balance and enjoyment. Try them for yourself.

Are You Taking Care of YOU?
Get a FREE Self-Care Checklist when you subscribe.